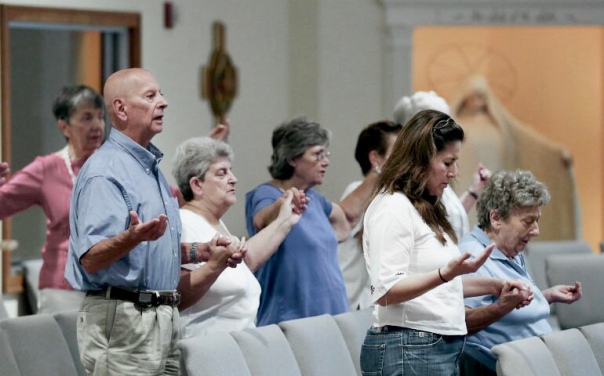 The following guest post comes to us from a young Catholic woman who is a friend of the site and long time reader of the Liturgy Guy blog. It is written in response to a recent article at the National Catholic Reporter Distorter, The Latin Mass becomes a cult of toxic tradition. That embarrassingly amateurish diatribe does not deserve a serious rebuttal, but it does warrant a response, and humor (in this case parody) seems most appropriate.

One culture within the Catholic Church needing major reform is that surrounding the practice of the Novus Ordo Mass.

In the wake of completely unnecessary liturgical reforms instituted by the Second Vatican Council, the Novus Ordo Mass has become a rallying point for modernist, anti-Catholic sects that desperately seek to change the Church. The ultra-liberal Marxism practiced by these Novus Ordo groups is radical and narrow-minded.

The Novus Ordo fosters clericalist structures in the Church. The liturgy – spoken in the vernacular, thus alienating immigrants, migrants, and any Catholic not from a particular country – places all power in the hands of the priest. The priest spends most of the Mass looking at the people and incorporating his personality into the ceremony. The congregation is barely able to actively participate, let alone pray, because they are being smothered with music from the St. Louis Jesuits and subjected to the liturgical mosh pit known as the “sign of peace.”

All people inside the church are expected to kneel on cue at various points, unless it’s a really left-wing Novus Ordo where the priest tells people they should stand during the Consecration.

The priest is at the center of the spectacle. He is separated from the people he is supposed to serve by felt banners – a barrier that gives him privileges. To receive the Eucharist, people must hold out their hands to the Extraordinarily Unnecessary Fake Minister of Holy Communion or be subjected to a fake blessing from said baby boomer.

Meanwhile, the Novus Ordo innovation oppresses women. Women are expected – indeed, in some cases commanded – not to cover their heads as has been Christian tradition for millennia. It is a total denial of the sacredness of women and the respect men are to show them, as well as the desire of many women to veil. It is discrimination, and therefore the Novus Ordo actively endorses sexism. Instead of a unifying form of worship, the Novus Ordo is often unrecognizable from place to place because of the many liturgical abuses. It has become a gathering point for modernists who deny key tenets of the Catholic faith.

In most cases, it is useless to politely disagree with people in the Novus Ordo sect. Their attitude creates blindness — not only to true faith, but to their own behavior. They treat others with pride and animosity, but their conscience fails to kick in because they are convinced their way is holy and other ways are not. And they call anyone who doesn’t belong to their sect schismatic or sedevacantist.

Anyone who may accuse me of not knowing what I’m talking about — a favorite indictment of the Novus Ordo ideologues — would be wrong. My opinion is based on facts and personal experiences.

I recently went to a Novus Ordo Mass with a relative who grew up before Vatican II, and the treatment we got was so judgmental. Anything looking remotely female was completely trying to be male. The people were all washed up 1970s hippies, and the pastor, arrayed in hideous vestments, was more like a circus clown. After over an hour spent drowning in the Fake Eucharistic Ministers’ hand sanitizer and getting sneered at for trying to pray, we did not feel any closer to God.

Rules, also, were a strange issue. For example, veils wereforbidden to be worn in the church. A confessor there hit one of my family members with the penance of “smile at someone tomorrow.”

After some while of this torture, my mother spoke with a different priest about the idiotic penances. He advised her that the genuine Catholic faith does not actually teach that sin is real, so there is no need to do any penance, let alone go to Confession. Immediately we stopped going to Mass at that parish.

But it wasn’t the last time I would run into Novus Ordo Masses— or the Novus Ordo sectarians, present today in many Catholic organizations.

After almost leaving the church as a teenager, I decided to stay Catholic and parish hop on Sundays so I could experience the polka Mass, the clown Mass, and the folk Mass depending on where I was.

One time, a priest noticed I was showing up semi-regularly and approached me with a persuasive speech to convert me to the Novus Ordo faction — disguising discrimination as encouragement. “You should be an altar server at the Novus Ordo Mass. Women look the most beautiful in church when they are dressed in an alb – we don’t do a cassock and surplice here, of course.”

It should come as no surprise that a contingent of men active within the sectarian Novus Ordo environment are total beta males. These types believe they are inferior to women simply because they are male. Most concerning is their inability to lead as Christ has called men to lead. These men did not want to associate with women unless those women attempt to religiously dominate them.

Men in this Novus Ordo peer group interview young women about their career goals before deciding to spend time with them. If they express any desire to be a mother before age 35, they’re ostracized and oppressed.

Unsurprisingly, while at the Novus Ordo I had another memorably bad experience. I asked to receive Communion kneeling and on the tongue, because I believe the Eucharist really is the body, blood, soul, and divinity of Jesus Christ. Most Novus Ordo-type priests I’d encountered in my lifetime would give me the Eucharist kneeling and on the tongue, albeit somewhat begrudgingly. Not this pastor. He literally made a scene at the altar and jerked the Eucharist away from me when I knelt downto receive it — as if it was somehow disrespectful to Our Lord to present myself in a reverent posture.

I seriously considered walking out of the church at that point, but decided to receive the Eucharist instead since I wanted to pray. After Mass I gave the priests a piece of my mind.

Clericalism defined the response I received. When I informed an assisting priest that the pastor had been very rude to me at the altar and asked that my views be relayed, he replied: “I won’t throw our pastor under the bus. He’s the pastor. I refuse to tell him to correct his behavior.”

He continued, “the bishop is totally on our side, so don’t even bother trying to write a letter. It’ll go straight to his trashcan.”

I reminded him that, as a priest, he was supposed to uphold the Catholic faith. The priest took a step back and looked at me in astonishment, as if that notion had never occurred to him. “Very well. I’ll tell the pastor what you said,” he said condescendingly. “But I don’t think he did anything wrong.”

His attitude was a trademark example of the culture within the Catholic Church that encourages abuse. His first reaction was to default to absolute loyalty to his Novus Ordo pastor, then dismiss my views. When pressed further, he flat-out denied all wrongdoing. To Novus Ordo clericalists, complainers are always the problem — not those who are committing liturgical abuses and preaching heresy.

With feudalistic rigidity, the priest argued in defense of his pastor against the traditions of the “Church before Vatican II” —a derogatory phrase used by Novus Ordo cultists to denote regular Catholic Masses. He said the Masses I regularly attended were “outdated” and “abolished” and insisted they were only “allowed to exist, but not standardly recommended.” He claimed the Church only allowed kneeling for Holy Communion “in extreme cases.” Of course, I know this is not true. He capped his radical fundamentalist arguments by saying the Novus Ordo, despite literally being invented half a century ago by a man who likely was a Freemason, is a solemn rite equal to Byzantine and Coptic rites and that rules cannot be changed for anyone. He accused me of being “rude” by expecting them “to not change their rites.”

What I gained from this experience was a deeper recognition of how the Novus Ordo Mass foments the clericalist culture within the Catholic Church that Pope Francis is actively working to continue.