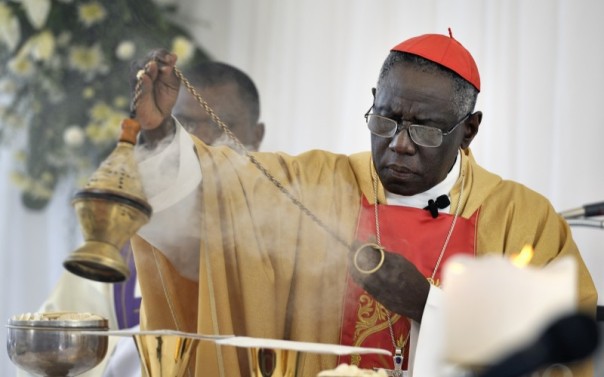 As many readers of this blog are aware of by now, the prefect of the Congregation for Divine Worship and Discipline of the Sacraments recently gave a groundbreaking interview on Catholic worship.  Speaking to the French magazine Famille Chretienne, Robert Cardinal Sarah held nothing back about the need for the Church to return to offering the Holy Mass ad orientem.  Rather than considering this simply to be a matter of preference, Cardinal Sarah sees it as nothing short of returning God to the center of the liturgy.

For decades many have been advocating for the return of this traditional orientation in the Mass.  After all, the rapid and widespread embrace of versus populum worship immediately following the Second Vatican Council had nothing to do with the documents themselves.  As even Cardinal Sarah notes in his interview:

“More than 50 years after the closure of Vatican II, it becomes urgent that we read these texts! The Council never required the celebration facing the people! This question is not even brought up by the Constitution [on the Sacred Liturgy]…”

Of course, others have made the very same observation in the past. So what’s different now? Is this really all that significant? I believe it is.

First, it’s important because of who is saying it. As the current prefect of the Congregation for Divine Worship, Cardinal Sarah’s words carry with them an authority few others have.  When he speaks on matters of the liturgy, and does so with conviction, one would hope that his brother bishops would take note.

Secondly, Cardinal Sarah’s words represent a liturgical earthquake because they are as powerful as they are unambiguous. This has the potential to be a major turning point in the ongoing effort to recover a sense of the sacred in the Roman Rite. Reminding us that conversion is by definition a turning towards God, Cardinal Sarah states:

“I am profoundly convinced that our bodies must participate in this conversion. The best way is certainly to celebrate — priests and faithful — turned together in the same direction: toward the Lord who comes. It isn’t, as one hears sometimes, to celebrate with the back turned toward the faithful or facing them. That isn’t the problem. It’s to turn together toward the apse, which symbolizes the East, where the cross of the risen Lord is enthroned.”

“By this manner of celebrating, we experience, even in our bodies, the primacy of God and of adoration. We understand that the liturgy is first our participation at the perfect sacrifice of the cross. I have personally had this experience: In celebrating thus, with the priest at its head, the assembly is almost physically drawn up by the mystery of the cross at the moment of the elevation.”

Unfortunately, it’s been too easy in the past for bishops to dismiss the writings of Gamber, Lang, and even Ratzinger.  Not so when the words come from Rome.  At least one would hope not.  It would require a special kind of intransigence for bishops and priests to pretend that the prefect of the Congregation for Divine Worship didn’t say what he just said.

I have written previously about the influence and importance of worship in the formation and sanctification of the faithful. Lex orandi, lex credendi. This is what Cardinal Sarah is telling us as well. This is why he is not speaking of preferences, but rather of the “best way…to celebrate” the Holy Mass.

Please note that.  Cardinal Sarah is instructing the priests and bishops of Holy Mother Church of the best way to offer the Mass, and it’s ad orientem.  To emphasize this even further, he concludes:

“For us, the light is Jesus Christ. All the Church is oriented, facing East, toward Christ: ad Dominum. A Church closed in on herself in a circle will have lost her reason for being. For to be herself, the Church must live facing God…”

There are priests and even bishops who know that the best way to celebrate the Mass is ad orientem. From what I have personally been told by numerous priests, many fear the repercussions of a laity all too comfortable with the status quo, with the priest facing them during Mass. Truth be told, many are more than ready for this common turning toward the east. There are already parishes where all masses are being offered ad orientem (here and here) and the fruits are bountiful.

This brings us back to this momentous opportunity.

Cardinal Sarah has squarely placed this back on all of his brother bishops. A decision now, at the diocesan level, to encourage, support, and promote a return to offering the Mass ad orientem is simply an obedient response to Rome. It is simply a shepherd seeking to give to his flock the very best that we can give to God.

Pray that Cardinal Sarah’s words are taken to heart, and implemented, so that once again we can see God become the central focus of the liturgy.