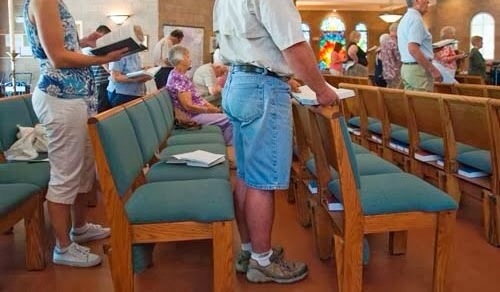 During his campaign for the presidency back in 2000, candidate George W. Bush addressed the 91st annual convention of the NAACP. During the speech Bush condemned what he called “the soft bigotry of low expectations”, or the belief that certain groups or individuals cannot be held to the same standard as everyone else simply because of who they are.

Sadly, this “soft bigotry of low expectations” has plagued the Church in the post-conciliar years, particularly in regards to the liturgy and the behavior of the laity. During the papacy of Benedict XVI the Church witnessed a slight reversal of this trend, due in no small part to the revitalization of the Traditional Latin Mass and an overall emphasis on liturgical reform and recovery of the sacred.

However, the return of low expectations for the faithful, along with a more vocal and strident defense of irreverent behavior, have steadily increased of late, particularly on the internet and on social media sites like Facebook. A refusal to condemn irreverence at Mass is now presented by many as the more charitable and merciful path to follow. Endless references to Pope Francis and the Church as a “field hospital” are frequently invoked by those whose solution to immodesty or irreverence at Mass is to simply look away and pray.

Women dressing immodestly to mass. Seemingly healthy men and women choosing not to kneel during consecration. The “dine and dashers” leaving mass immediately after receiving communion. In the current environment there is a growing chorus of irreverence enablers who refuse to condemn such behavior because they refuse to judge others actions. It is the continued broad brush misapplication of our Lord’s words, “Judge not, that you be not judged.” (Mt. 7:1). Ascribing it to a spirit of Christian charity, though it is not, many Catholics today seek to excuse the widespread irreverence with platitudes such as:

“We don’t know what’s in their hearts.”

“We shouldn’t worry so much about how people dress for Mass because what really counts is what’s inside.”

Of course all of these excuses offered simply present a false dichotomy. Our external actions are indeed manifestations of our interior disposition. Further, to admonish the irreverent actions of someone, to set expectations and provide guidelines, in no way questions their faith or integrity. The intent is simply to correct their behavior. If we truly believe that how we worship reflects, and actually reinforces, what we believe (lex orandi, lex credendi), then it is authentic charity which seeks to address irreverence and not enable it.

We can ask if the same excuses listed previously would be made if it were someone’s education being discussed. The notion that a teacher should celebrate a student simply “showing up” for school but have no further expectations for them is preposterous. Or that we should disregard dress codes for students simply because “what is on the inside is what really counts.”

We also have to ask ourselves why so many continue to devalue the faith by holding such low expectations for others. Why are they shocked that someone might actually want to go to Mass? Why are they afraid to expect reverence and modesty from others? God forbid we should expect people to comport themselves appropriately for the most beautiful thing this side of heaven.

We Are Both Spirit and Flesh

This soft bigotry of low expectations is often presented with the most emotionally manipulative of scenarios, such as:

The person who leaves Mass early may be rushing home to care for an ill family member.

The athletic looking man who appears healthy enough to kneel isn’t because he suffered a catastrophic sports injury to his knee years earlier.

The young woman who dresses in a provocative manner has been away from the Church for years and has finally mustered enough courage to return.

In the end, the inconvenient truth often ignored by these enablers of irreverence who present these “what if” scenarios is that most of those guilty of such behavior are regular mass attendees with no extenuating circumstances. Further, it is often entire parishes that exhibit a culture of irreverence. The desacralization of the faith so easily excused by many is a sign of a real sickness in the Church today. This effort to divorce ones interior disposition from his or her exterior actions is contradictory to the sacramental nature of Catholicism. After all, we are both spirit and flesh.