This isn’t the 1970’s Neomodernist Prelates 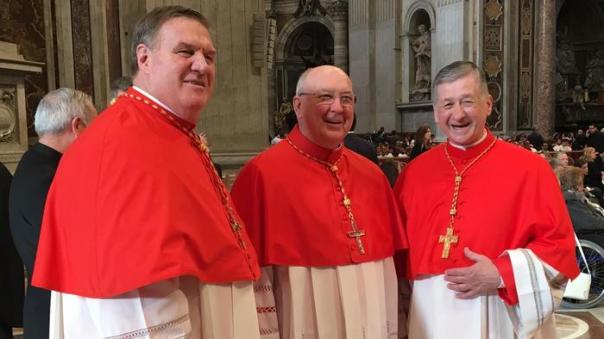 Today’s Gradual for the Mass, the Fourteenth Sunday after Pentecost on the Traditional Calendar, couldn’t come at a better time. Excerpted  from Psalm 117, it speaks to us today in the midst of ecclesial scandals and the ongoing revelation of unspeakable evils. It speaks of our bishops.

A friend made an observation regarding the timing of the current crisis that is worth sharing here:

“Today’s readings are especially apropos. After meditating on these readings and today’s news of the testimony against Pope Francis himself, I am firmly convinced that the reason the rot is now being exposed is because we have, today, the largest number of Traditional Masses being said around the world since the new Rite was imposed upon the faithful by the same men who have committed these unspeakable acts and protected themselves for almost a century. Ordinary men and women – and their many children – striving for holiness and faithfully praying these ancient prayers of the Church at the Holy Sacrifice of the Mass, crying out to God for a restoration…of His Church and an end to the seemingly unending corruption of the hierarchy.”

Indeed, the time is now, and not only because of this resurgence of authenticity among the faithful. It is also time because our means of communications accommodate this necessary cleansing.

In other words, this isn’t the 1970’s neomodernist prelates!

Today’s bishops are being immediately held accountable by an informed laity. There isn’t the need to rely upon traditional media or official church news outlets for our news.

In addition, faithful priests, often the most targeted and maligned over the last fifty years, have direct means of communicating with the laity. We are privy to know what they know, to see the marginalization and leftist Alinsky-like tactics employed by wicked men eager to maintain their grip on power.

Neomodernists still think they are in the 1970’s. Many of these same men also make up the lavender mafia, that cabal of homosexual prelates who have spent decades protecting and promoting their own.

This wicked generation believes that they can continue on as they have always done. Their mindset is still of a time where the faithful were ignorant of their evil, of their infiltration, of their deeds. Stall, obfuscate, divert, deflect, lie.

Here is my message to these bishops who still…STILL…seek to oppose the restoration of authenticity and to obstruct and delay justice: you have badly miscalculated this time. Your time is up. You have abdicated your authority, you have abused your power (as well as innumerable victims), and you must resign, face prosecution, repent before it’s too late, and seek forgiveness. Nothing less than this will do.

This is not the 1970’s. The neomodernism being peddled is repugnant to our sensibilities and decidedly not Catholic. Your World Meeting of Families in Ireland, with speakers such as Father James Martin, SJ (who is enthusiastically endorsed by Cardinals Cupich, Farrell, and Tobin-pictured above) and bizarre liturgical vestments reminiscent of another (folk) era, demonstrates your tone deafness and disconnect from your flock. You continue to abuse the faith just as you have continued to cover up abuse against the vulnerable.

Several months back I was fortunate enough to dine with Bishop Athanasius Schneider, that bold defender of the immutable faith. He said something quite profound that is worth noting here. To paraphrase, Bishop Schneider said that if the resurgence of tradition (i.e. authenticity) is the will of the Holy Spirit, then it cannot be defeated. And if it isn’t, then it cannot win.

Neomodernism is a lie, it is ugly, and it is evil. Authentic Catholicism, by contrast, is true, beautiful and good.

A good, holy, and traditional priest recently told me that this current crisis will have to be won by the laity. I agree with him. Read Archbishop Carl Maria Vigano’s letter calling for mass resignations in the episcopacy, up to and including Pope Francis. Those men cannot solve this problem; they are the problem. We must do it.

Demand action! Settle for nothing less than the removal of these neomodernists and the exposing and dismantling of the lavender mafia. Support the few bishops and cardinals speaking out. Contact the chancery in your own diocese directly and hold your bishop accountable. Withhold money from the Church wherever there is inaction.

We the laity have been granted this opportunity to defend Holy Mother Church against those who have repeatedly defiled her through their evil and criminal actions, as well as their attacks against orthodoxy and authenticity. Accept this mantle you have been given.