On Resignations and Lightning Strikes 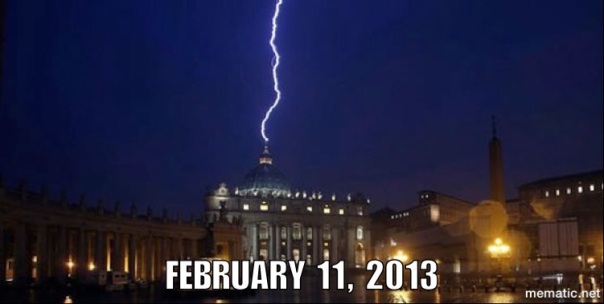 On February 11, 2013 Pope Benedict XVI told a consistory of Cardinals that he would soon be resigning the papacy, becoming the first pope to do so in 600 years. Within hours of the announcement a bolt of lightning struck St. Peter’s Basilica in Rome.

Some viewed this as a sign from above; divine intervention of sorts. Others dismissed the suggestion as utter nonsense. Looking back now, after four years of the Francis papacy, it would seem that the former idea isn’t so far fetched.

Writing of the resignation and that sad and surreal moment in the life of the Church, one archbishop who was there that day noted:

Within seconds it was clear what was happening. This was no ordinary address. He did not speak about the consistory and the soon-to-be saints, or a few changes in administration, or the anniversary of the Lateran treaties, or the end of the historic dispute with Italy. Instead, he made history. I felt my stomach turn over as I realised that here before us was something not seen for centuries: the voluntary resignation of the Roman Pontiff.

In many ways it seems that the Church has yet to regain her footing.

Within hours of Benedict’s announcement a heavy storm rolled into Rome. As noted by the UKs Met Office (which monitors meteorological activity), and reported by the BBC:

“Looking at the thunderstorm activity at the start of February, there seems to have been a lot more stormy activity in the area around Rome”…more than usual for the time of year.

Statistically St. Peter’s, with its location and great dome, stands a higher than usual chance of experiencing lightning strikes.

Having said that, it did not suffer another such occurrence until October 7, 2016 on the feast day for Our Lady of the Rosary, when the Church recalls Christian Europe’s defeat of the Ottoman Empire at the Battle of Lepanto.

In otherwords, while the risk of strikes are high for St. Peter’s, they are sill a rare occurrence.

Ultimately the significance of that announcement in February 2013 does not depend upon the lightning strike that followed. For those who have been paying attention over the last four years and who have the formation, integrity, and historic context to assess the machinations of the current papacy, the signs are clear.