On Candles and Sacrifice 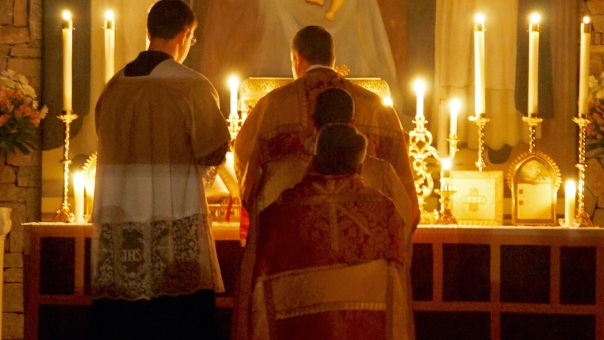 The following is a guest post by Chris Lauer of the Charlotte Latin Mass Community. Chris was the procurator for the group Coetus Fidelium which worked diligently for the return of a weekly traditional Latin Mass to Charlotte, North Carolina. The following post is presented with his permission.

On Candles and Sacrifice

The date February 2nd is a special date in our household. It is special, not only because it is my wife’s birthday, but also because it is the Feast of the Purification of the Blessed Virgin Mary, also known as Candlemas – a feast which dates back to the early Church fathers.

Candlemas is the fortieth day after Christmas, and is the day the Church celebrates when the Blessed Virgin Mary in obedience with Mosaic law, presented the Christ child to Simeon the Just, in the temple (Numbers 18:15), and submitted herself for the ritual purification (Luke 2:22).

On this feast day, Catholics customarily would bring all the candles they would use in their home throughout the coming year to the Church to be blessed. The priest would also lead the congregation in a solemn procession to symbolize the light of Christ entering the temple.

Long before Thomas Edison’s work on commercially practical electric light in the 1870s, the Catholic Congregation for Sacred Rites decreed that it is not permitted for a priest to offer Mass in the dark or to begin Mass before the altar candles are lighted, nor are they to be extinguished until the end of Mass. If the candles burn out before the Consecration of the Eucharist, and cannot be relit, the Mass should be discontinued. Going further, the Church prescribes that the candles used at Mass and at other liturgical functions be made of a majority part pure beeswax.

Many have questioned why the Church dedicates so much veneration for seemingly silly externals like beeswax candles. Like many before have done when there is a question on Church liturgical matters, I turned to Servant of God, Dom Prosper Guéranger, OSB. Quoting from his famous work, The Liturgical Year, on the symbolism of candles:

The mystery of today’s ceremony [Candlemas] has frequently been explained by liturgists, dating from the 7th century. According to Ivo of Chartres, the wax, which is formed from the juice of flowers by the bee, always considered as the emblem of virginity, signifies the virginal flesh of the Divine Infant, who diminished not, either by His conception or His birth, the spotless purity of His Blessed Mother. The same holy bishop would have us see, in the flame of our Candle, a symbol of Jesus who came to enlighten our darkness. St. Anselm, Archbishop of Canterbury, speaking on the same mystery, bids us consider three things in the blessed Candle: the wax, the wick, and the flame. The wax, he says, which is the production of the virginal bee, is the Flesh of our Lord; the wick, which is within, is His Soul; the flame, which burns on top, is His divinity.

This is quite fascinating – the symbolic connection of the bees as emblems of virginity – the wax symbolizing the flesh of our Lord. Researching deeper on this topic, Catholic author and columnist, Catherine Croisette, expands on this theme in an article she penned titled, The Bee, A Symbol of the Church:

St. John Chrysostom … wrote: ‘The bee is more honored than other animals, not because it labors, but because it labors for others” (12th Homily).’ So, I realized that the bees, like the clergy and religious men and women in the Church, work unceasingly for the common good of the hive and obey without question their superiors, and above all their queen.

The symbolism of bees also signifies the way the Church generates her spiritual fruits because bees are virginal, they don’t have any sexual contact. As the Church gives grace through the purity of her divine Sacraments, so the bees give us honey and wax by the labor of their pure bodies. This is why their wax, considered the fruit of a virgin labor, is worthy to burn in the candles on the altar at the offering of the Holy Sacrifice.

Last month I had the opportunity to attend a talk given by Father John Berg, Superior General of the Priestly Fraternity of St. Peter, at St. Joseph Catholic Church in Richmond, Virginia. At this talk, Father Berg made a similar connection of candles to the Holy Sacrifice of the Mass. From memory I submit his thoughts on the matter.

Father Berg explained to those of us assembled that the reason altar candles should be made of at least 51 percent beeswax is due to the added sacrifice, both the sacrifice from the added financial cost to humans, as well as the sacrificial labor of the bees who literally work themselves to death for the creation of this purest form of wax.

Additionally, the flowers on the altar should be cut flowers as opposed to potted flowers. Using cut flowers at Mass is more pleasing to God as they are mortally sacrificed, slain in the height of their beauty as an offering to the Mass.

The music at Mass should be performed live as opposed to recorded music. The sacrificial labor of the organist, choir, and schola through countless hours of practice and rehearsal is an offering for the altar.

Likewise, he added, that the bread, the wine, the altar linens, the gold threaded vestments, the altar servers- everything on and around the altar has to have some form of sacrifice associated with it.

Father Berg concluded that this presence of sacrifice is the single greatest unifying characteristic identifying every other known religion throughout the ages. Buddhism, Hinduism, paganism, Judaism, all have some form of sacrificial offering – deficient as they all may be. The only exception to this basic characteristic of a religion is found with Protestant theologies which have removed every form of sacrifice from their rituals. It was a profound talk in many more ways than I can express.

The rich traditions of the Church never cease to amaze. Several years ago, while on pilgrimage to Rome, I took a guided tour of St. Peters Basilica. Unfortunately the official Vatican tour guide assigned to our group was not very well prepared for her job.

When our tour group reached the famous Altar of the Confession with Bernini’s masterpiece baldacchino, we saw how the four columns were covered with leafy branches and little sculpted bees laboring about. When someone in the group asked about these bees, the tour guide told us that Bernini sculpted them to honor himself because his name begins with the letter “B”.

I remember seriously doubting her explanation that this master artist would so prominently indulge in such a trivial vanity. Needless to say, knowing now the rich historical symbolism that the Church holds for bees, I was glad to confirm my doubts on this matter.

Researching this topic has been a special treat which has resulted in a real deepening of my faith, especially during this season of Epiphany. I pray that these traditions help others in a similar way.