When Will We Stop Profaning the Holy Mass?

In my most recent blog post I discussed the ongoing irreverence shown by some priests who treat the Mass as entertainment, and the sanctuary as their stage. From ukulele playing bishops to hoverboard riding priests, we continue to see irreverent behavior exhibited by those who offer the Holy Sacrifice in persona Christi.

Many defend such antics as simply being another way to “reach the youth” or to “meet people where they are.” It seems at times that we have grown indifferent to these profane actions, incapable of outrage anymore because we long ago lost the sense of the sacred, the transcendent.

The most recent example of this liturgical nonsense unfortunately comes out of my own diocese, courtesy of Monsignor Anthony Marcaccio and St. Pius X Catholic Church in Greensboro, North Carolina.

I have been told that lately Monsignor Marcaccio has increased the use of props during his homilies, often for comedic effect. For a Confirmation Mass on Pentecost Sunday monsignor took this to a whole new level when he incorporated the use of a  “Windy Man” (sometimes called an inflatable sky tube) for his homily to the teens. 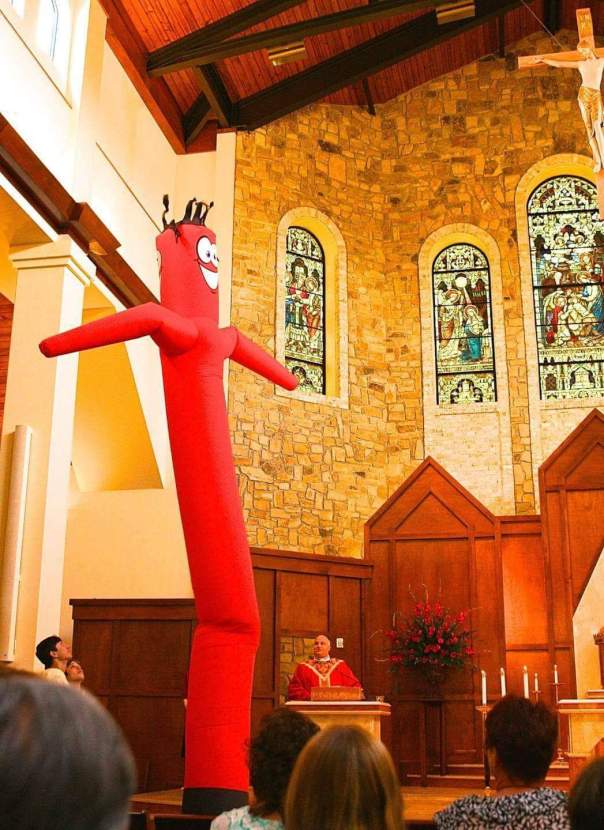 Sadly, I know that there will be many who will excuse this.  The line between the sacred and the profane was smashed long ago in many parishes.  The idea of a “Windy Man” being brought into the sanctuary, the very place where heaven touches earth upon the altar, will seem perfectly acceptable to many Catholics.  To be fair, I have been told that not everyone at St. Pius was pleased with monsignor’s stunt.

Hopefully, many others will recognize this for what it is:  scandalous.

It’s not unreasonable for Catholics, both clergy and laity alike, to look to our bishops and ask yet again, “When will we stop profaning the Holy Mass?”