The All Too Ordinary Use of Extraordinary Ministers 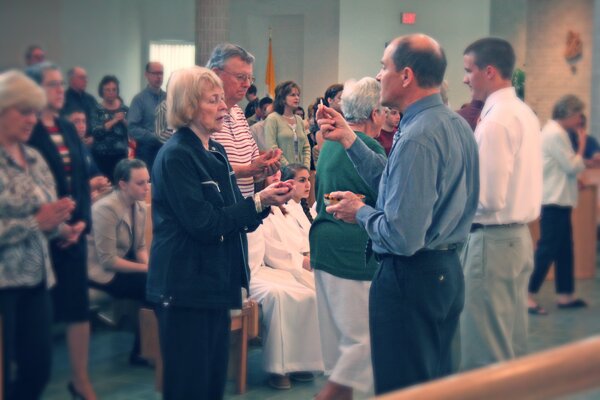 Many Catholic faithful over the last forty years have seen the all too common utilization of Extraordinary Ministers of Holy Communion during the Mass. An innovation from the 1970’s intended for occasional use in emergency situations, these extraordinary ministers have indeed become quite ordinary in your ordinary parish Mass on any given Sunday. Sadly, this modern practice has contributed greatly to the blurring of lines between the sanctuary and the nave, as well as between the ordained and the laity.

In January, 1973, the Sacred Congregation of the Sacraments (now called the Congregation for Divine Worship and the Discipline of the Sacraments) issued the document Immensae Caritatis, which established Special Ministers of the Eucharist to assist with distribution of Holy Communion, particular at masses when other priests or deacons were not available, when either ill-health or old age impeded the celebrant from distributing communion alone, or most notably, whenever the number of faithful wishing to receive communion was so great that the Mass would take too long. (How is that for an arbitrary standard?)

What has of course happened in the ensuing decades since this provision was made is a long history of liturgical excesses and abuses. As is often the case, the exception has now become the norm.

The most obvious abuse that we have all witnessed is the sheer number of Extraordinary Ministers of Holy Communion typically used at any given Mass. A liturgical exception meant to be reserved for special emergency situations has become standard operating procedure in far too many parishes.

To address this ongoing problem, in August 1997 the Vatican issued the instruction On Certain Questions Regarding the Collaboration of the Non-Ordained Faithful in the Sacred Ministry of Priest. In Section 2 Article 8 the Church once again clarified that the use of these Extraordinary Ministers should only be utilized “where there are particularly large numbers of the faithful and which (the Mass) would be excessively prolonged because of an insufficient number of ordained ministers to distribute Holy Communion.”

In addition, the Church stressed the avoidance and elimination of certain practices which had emerged in certain dioceses and parishes and were creating confusion. One such practice? The habitual use of extraordinary ministers of Holy Communion at Mass thus arbitrarily extending the concept of “a great number of the faithful”.

There is an immediate way to reduce this abuse of the current practice; an approach that has already been implemented in some parishes and which reduces the need for many of these extraordinary ministers: stop distributing Holy Communion under both kinds at Mass.

The Doctrine of Concomitance

If more parishes chose to return to the traditional practice of distributing only the consecrated host to the faithful at Mass we would immediately remove the need for half of the Extraordinary Ministers currently assisting at communion.

For over a millennium the Latin rite of the Catholic Church did not offer the chalice to the faithful. The Doctrine of Concomitance , the belief of our Lord’s entire presence in either element of the Eucharist (bread or wine), was reaffirmed at the Council of Trent when the Church declared:

If anyone denies that Christ, the fountain and author of all graces, is received whole and entire under the one species of bread…let him be anathema. (Session XXI, Canon III)

If we the faithful receive our Lord entirely (body, blood, soul and divinity) when we receive the consecrated host, then why is it necessary to stand in line for an Extraordinary Minister to give us our Lord entirely (again) in the chalice? The Church further stated at Trent that “those who receive one species only are not deprived of any grace necessary to salvation.” That being the case, why do so many parishes unnecessarily create a need for Extraordinary Ministers by offering Communion under both kinds at every Sunday Mass?

A common theme I often write about is the need to reestablish consistency between the two forms of the Roman Rite, as well as recovering continuity with our liturgical heritage. Many parishes are already incorporating this approach. Since the Traditional Latin Mass does not permit for either the use of Extraordinary Ministers of Holy Communion, or the offering of the chalice to the faithful at communion, the implementation of this suggested reform would create further visible consistency between the two forms of the Mass.

In our continuing effort to restore a sense of the sacred to the liturgy, let us pray that this ordinary use of extraordinary ministers soon becomes a thing of the past.

An earlier version of this article was originally published August 26, 2013.