The Missionary Zeal of Christopher Columbus 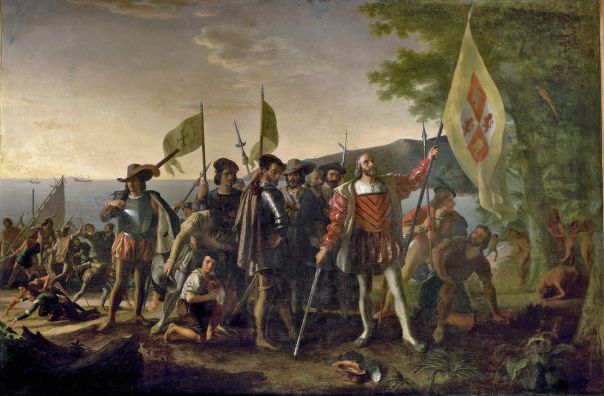 The following guest post was written by Mike FitzGerald, co-chair of the Charlotte Latin Mass Community and also co-leader of the Catholic Pro-Life Action Network of Charlotte.  Mike also serves as a free-lance correspondent and photographer for the Catholic News Herald, the official newspaper of the Diocese of Charlotte, North Carolina.

Over 125 years ago Pope Leo XIII decreed that a votive Mass of the Holy Trinity be offered on October 12 in thanksgiving for Columbus’ discovery of America and bringing of the Catholic faith to this hemisphere.  Commending Columbus, Pope Leo XIII wrote in his encyclical:

For Columbus is ours; since if a little consideration be given to the particular reason of his design in exploring the mare tenebrosum, and also the manner in which he endeavoured to execute the design, it is indubitable that the Catholic faith was the strongest motive for the inception and prosecution of the design; so that for this reason also the whole human race owes not a little to the Church.

We decree, therefore, that on October 12, or on the following Sunday, if the Ordinary should prefer it, in all the Cathedral churches and convent chapels throughout Spain, Italy, and the two Americas, after the office of the day there shall be celebrated a Solemn Mass of the Most Holy Trinity…  Quarto Abeunte Saeculo, 1892

In recent times, Columbus and his legacy has been unnecessarily criticized through lies and falsehoods.  But as Servant of God, Fr. John Hardon, SJ observed in his book “Christopher Columbus: The Catholic Discovery of America”, Columbus had a deep faith for Christ and expressed it in many of his writings. Fr. Hardon provides several examples from Columbus’s log:

As is our custom, Vespers were said in the late afternoon, and a special thanksgiving was offered to God for giving us renewed hope through the many signs of land He has provided.  I now believe that the light I saw earlier was a sign from God and that it was truly the first positive indication of land.  – October 11, 1492.

I want the natives to develop a friendly attitude towards us because I know they are a people who can be made free and converted to our Holy Catholic Faith, more by love than by force. – October 12, 1492.

For Fr. Hardon, it was clear that the missionary zeal of both Columbus (a Third Order Franciscan) and Servant of God Queen Isabel the Catholic (as declared in 1974), led them to pursue this mission.  This hunger for souls for Christ may have also been one of the reasons, another Servant of God, Fr. Michael J. McGivney, chose the name Columbus for his new fraternal order, the Knights of Columbus.

Those of us in Charlotte, North Carolina should be particularly thankful for Columbus because less than 50 years after his discovery, a subsequent Spanish expedition led by Hernando De Soto introduced the Catholic faith to the Carolinas in 1540 as he passed near Charlotte with his priests.  As such, we close with Pope Leo XIII:

And, above all, it is fitting that we should confess and celebrate in an especial manner the will and designs of the Eternal Wisdom, under whose guidance the discoverer of the New World placed himself with a devotion so touching. – Quarto Abeunte Saeculo

It is a reminder for us to reclaim the Holy Faith that was introduced to these lands five centuries ago and with zeal share it with those who are separated from it or who lack it in its entirety.