← Photopost: First Holy Communion in the Traditional Mass
Altar Serving and the Ordination Class of 2017 → 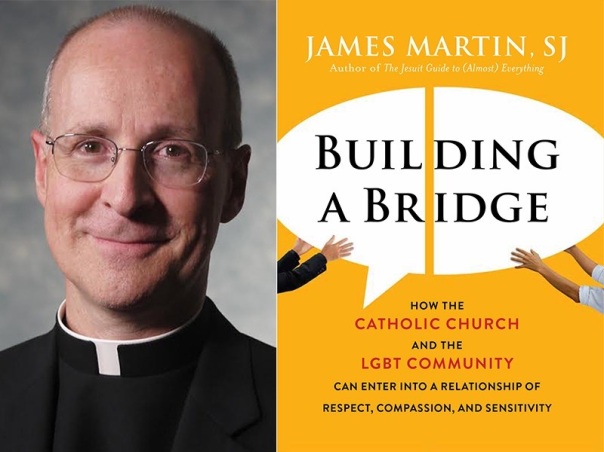 The crisis in the Church today is accelerating at a speed surprising even by post-conciliar standards. Nowhere is this more obvious than the current shift in how the Catholic Church addresses homosexuality. The election of Pope Francis four years ago, the subsequent synods on the family, and several strategic promotions within the hierarchy have led to a watershed moment in the 2,000 history of the Church.

Later this month Harper Collins will publish the latest book from Jesuit Fr. James Martin, editor at large of America Magazine. Fr. Martin is also well known for his large social media presence (over 100,000 followers on Twitter and more than a half million on Facebook), as well as his past appearances on the Colbert Report on Comedy Central, and his consultative work on Martin Scorsese’s recent movie Silence. He was also recently tagged by Pope Francis to join the Secretariat of Communications dicastery in Rome as a consultant on means of evangelizing the world in the digital age.

Here in lies the problem, and it’s known by everyone in the Church, but sadly too often excused or dismissed. Fr. James Martin has become a vocal activist for “LGBT Catholics”, even going so far as to receive awards from dissident groups like New Ways Ministry (who openly support same sex marriage and call for the Church to evolve on this issue).

Fr. Martin also frequently takes to social media with articles and quotes in support of LGBT activism and talking points, only to receive praise from his followers. When doctrine is misstated by those very same followers, or they openly endorse homosexual acts as being holy and normal, he fails to correct them. That he sows confusion is evident after only a few minutes of reviewing his social media accounts.

In many ways, however, Fr. James Martin is a perfect representation of the contemporary Church. He is a post-conciliar poster child. He is the embodiment of the new Francis Church, where accompaniment, encounter, and dialogue (“building bridges”) have pride of place over outdated words such as sin, repentance, conversion, grace, judgement, heaven, or hell.

One only need to look at the endorsements given his soon to be released book Building a Bridge to realize where we are today. We are experiencing one of the great crises in the history of the Church.

Not one, but two, recently promoted cardinals have endorsed Fr. Martin’s book. Cardinal Kevin Farrell, who Pope Francis appointed as Prefect of the Dicastery for Laity, Family, and Life, writes:

“A welcome and much-needed book that will help bishops, priests, pastoral associates, and all church leaders more compassionately minister to the LGBT community. It will also help LGBT Catholics feel more at home in what is, after all, their church.”

“In too many parts of our church LGBT people have been made to feel unwelcome, excluded, and even shamed. Father Martin’s brave, prophetic, and inspiring new book marks an essential step in inviting church leaders to minister with more compassion, and in reminding LGBT Catholics that they are as much a part of our church as any other Catholic.”

“The Gospel demands that LGBT Catholics must be genuinely loved and treasured in the life of the church. They are not. [Fr. Martin] provides us with the language, perspective, and sense of urgency to replace a culture of alienation with a culture of merciful inclusion.”

And then, among the endorsements of these prelates, we find Sr. Jeannine Gramick of the previously mentioned New Ways Ministry:

“Father Martin shows how the Rosary and the rainbow flag can peacefully meet each other. A must-read.”

So why would New Ways Ministry invite Fr. Martin to address their Bridge Building Award ceremony, and why would Sr. Gramick be asked to endorse his new book? After all, neither seek accompaniment, but rather acceptance-not of themselves but of their lifestyle.

And this is why we the laity need our bishops and priests, those who still hold to the gospel truth and Catholic doctrine, to condemn this bridge of Fr. Martin’s and an increasing number of bishops and cardinals. The bridge being built isn’t designed for repentance, conversion, and sanctity. It is not a bridge built to lead souls to heaven. In fact, the entire language of this current movement is completely void of the supernatural. It is therapeutic language solely focused on a temporal end: acceptance. It is capitulation to the cultural left rather than proclamation of the gospel truth.

This proposed accompaniment and encounter, this bridge being built, is not meant to bring souls out of sin and into a life of grace, but rather it seeks the conversion of the Church. It waits for the Church to evolve on this topic. Few in the movement care whether or not doctrine can or will change (it can’t); pastoral evolution accomplishes their work for them. At least for now.

By comparison, look to the international apostolate Courage which seeks to help people struggling with same sex attraction. From their site:

Persons with homosexual desires have always been with us; however, until recent times, there has been little, if any, formal outreach from the Church in the way of support groups or information for such persons. Most were left to work out their path on their own. As a result, they found themselves listening to and accepting the secular society’s perspective and opting to act on their same-sex desires.

In concluding their purpose, Courage notes:

In helping individuals gain a greater understanding and appreciation of the Church’s teachings, especially in the area of chastity, Courage extends the Church’s invitation to a life of peace and grace. In chaste living, one finds the peace and grace to grow in Christian maturity.

But here is why an apostolate like Courage will receive no public endorsement from the cardinals and bishop quoted above, or from Fr. James Martin: it begins with the clearly stated understanding that the homosexual act, just like pre-martial sex, or adultery, or any other sin of the flesh, must be conquered. Their accompaniment does not come at the cost of sowing confusion or with a tacit endorsement of a continuing homosexual lifestyle.

What Courage does have that the erroneous new movement doesn’t is a profoundly spiritual component. This is their bridge, designed to bring active homosexuals back into a life of grace:

The other reason why this new bridge being built is dangerous  and must be condemned is that it is part of the ongoing movement to discontinue the very language found in the Catechism of the Catholic Church related to same sex attraction. This, sadly, is consistent with the message being given by Rome these days. But nevertheless, the Catechism instructs:

“Homosexuality refers to relations between men or between women who experience an exclusive or predominant sexual attraction toward persons of the same sex. It has taken a great variety of forms through the centuries and in different cultures. Its psychological genesis remains largely unexplained. Basing itself on Sacred Scripture, which presents homosexual acts as acts of grave depravity, tradition has always declared that “homosexual acts are intrinsically disordered.” They are contrary to the natural law. They close the sexual act to the gift of life. They do not proceed from a genuine affective and sexual complementarity. Under no circumstances can they be approved.” (CCC 2357)

The genesis of Fr. James Martin’s book was an America Magazine essay entitled, Simply Loving, and his address at the October 2016 New Ways Ministry event. Both taken together provide us with the strategy being employed to deemphasize and confuse the Church’s teaching on human sexuality. We can generally break down this faulty bridge building into three components:

The Absence of Conversion: Unlike the Courage apostolate, nowhere in this strategy is repentance or conversion discussed. Instead, the focus is on the overly feminized and therapeutic language objectives of “respect, compassion, and sensitivity.” Fr. Martin notes that this comes directly from paragraph 2358 of the Catechism. However, when separated from the preceding language of the paragraph above, the context and balance is completely lost. Intentionally so. Authentic Catholic accompaniment requires that we include the language of sin and grace, mercy and judgement. Anything less is simply giving our struggling brothers and sisters a false compassion, or worse, affirmation of their error.

The Secular Language of the LGBT Left: Fr. Martin states that people have a right to name themselves. He told his audience at the New Ways ceremony:

“Names are important. Thus, church leaders are invited to be attentive to how they name the L.G.B.T. community and lay to rest phrases like “afflicted with same-sex attraction,” which no L.G.B.T. person I know uses, and even “homosexual person,” which seems overly clinical to many…I’m saying that people have a right to name themselves. Using those names is part of respect.”

In the current environment where self definition has grown to include gender fluidity and transgenderism, Fr. Martin’s words are eerily similar to that of the sexual left. Further, the actual designation of “LGBT” for a group of people was a 1990’s construct of the secular Left. This is an identification with a set of beliefs and an agenda, one based on the approval and promotion of homosexuality as normal behavior. And this brings us to the third and final strategic aim…

The Depersonalization of the SSA Catholic: What the Courage apostolate does so well, and what the Catholic religion has always instructed, is to recognize the dignity of the individual. Fr. Martin and those bishops who support him also claim this. The problem, however, is that the LGBT label and movement that they have decided to embrace does just the opposite. The individual takes a backseat to the group and to the behavior. The same sex attracted Catholic is defined by their sexuality and through identity politics.

It is interesting to note that Fr. Martin acknowledged this himself during his address at New Ways Ministry, although the irony of it seems to have been lost upon him:

“In this, as in all things, Jesus is our model. When Jesus encountered people on the margins, he saw not a category but a person.”

This is not the model he is following however.

What must be done at this time is for faithful bishops, priests, and laity to openly oppose this false mercy proposed through a faulty bridge.

Bishops are the local ordinary for their diocese. They can deny any priest or bishop from speaking within their parishes and authorized conferences. This is what many have done with retired auxiliary Bishop Thomas Gumbleton of Detroit, who has frequented some of these very same New Ways Ministry events in the past.

Fr. James Martin will no doubt be promoting this new book heavily in the coming weeks. He will very likely be asked to speak at some parishes or on local Catholic radio. Our bishops and priests, and those in the laity with a platform to communicate the message, must help prevent further confusion.

No one is more threatened by this dangerous bridge than those brothers and sisters with same sex attraction. Let us see more of our priests and prelates directing them toward an apostolate like Courage, and away from those who would seek to “accompany” them right off the cliff.

← Photopost: First Holy Communion in the Traditional Mass
Altar Serving and the Ordination Class of 2017 →