← We Are Becoming Like Profane Intruders
Liturgical Game Changers → 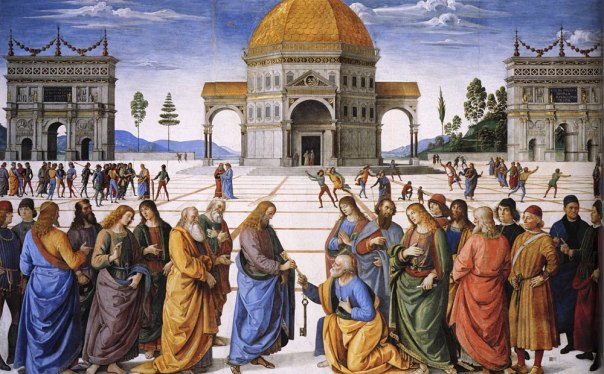 This weeks papal visit to the United States has once again proven that the dogma of papal infallibility is still widely misunderstood by both Catholics and non-Catholics alike. As defined by the First Vatican Council, and restated in the Catechism of the Catholic Church:

The Roman Pontiff, head of the college of bishops, enjoys this infallibility in virtue of his office, when, as supreme pastor and teacher of all the faithful – who confirms his brethren in the faith he proclaims by a definitive act a doctrine pertaining to faith or morals. . . (CCC 891)

The widespread enthusiasm and popularity for Pope Francis has resulted in a form of a papolatry at times, an ultramontanism that elevates nearly all utterances of the Holy Father’s to that which is beyond questioning.

Opposing this is a continued, and to some degree still widespread, anti-Catholicism in this country which is suspicious of both Catholics and “their” Pope. Often found among evangelical and non-denominational Christians, this group mistakenly believes that infallibility pertains to all pronouncements made by the Roman Pontiff.

In response to both of these incorrect and extreme views I submit for consideration the insight of Fr. Adrian Fortescue. Best known for his classic liturgical history The Ceremonies of the Roman Rite Described, it is his 1920 work The Early Papacy in which Fortescue revisits the scriptural and historical foundation for the primacy of the Pope. Fortescue’s words regarding papal infallibility are as relevant today as when he first wrote them nearly a hundred years ago:

“Providence will see to it that the Pope shall never commit the Church to error in a matter of religion. This is the famous “infallibility” of the First Vatican Council. It is as well to state again plainly what it does mean. It does not mean any sort of inspiration given to the Pope. It does not mean that he will always know or understand more about our religion than anyone else. A Pope might be quite ignorant and a very poor theologian. He may make a mistake as a private theologian; only God will take care that he does not commit the whole Church to it. Papal infallibility is a negative protection. We are certain that God will not allow a certain thing to happen; that is all. It does not mean that the Pope will always give the wisest or best decision or that what he says will always be well advised or opportune. He may not speak at all; he may preserve a regrettable silence, just when it would be greatly to the good of the Church if he did speak. But if he does speak, and if he speaks in such a way as to commit the Church, then what he says will not be false. It maybe inadequate.”

Fortescue continues by explaining what is meant by an ex cathedra statement:

“When does the Pope so speak as to commit the whole Church? This is what we mean by a decision ex cathedra. The First Vatican Council defined that the Pope’s decisions ex cathedra cannot be false. It says nothing about any other kind of papal pronouncement; it explains an “ex cathedra” statement as (1) a definition, (2) of dogma on faith or morals that (3) binding on the whole Church. This leaves the Pope as much power of expressing his opinion on any subject as anyone else, of expressing it as forcibly as he thinks necessary, yet without committing us to any theory of special divine protection for such statements, unless he satisfies these conditions.”

← We Are Becoming Like Profane Intruders
Liturgical Game Changers →