← Evangelization and the Need for the Latin Mass
Papal Infallibility Revisited → 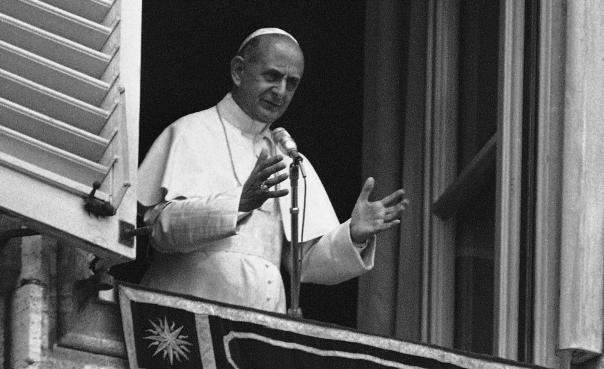 A few weeks ago I posted an excerpt from Pope Paul VI’s November 19, 1969 General Audience in which he spoke of the implementation of the Novus Ordo Missae. Today I would like to direct your attention to the following week’s address when Pope Paul continued discussing the impending changes to the Church’s centuries old liturgy. The Holy Father’s words clearly demonstrate the post-conciliar view which believed that the beautiful and sacred must give way to the simple and profane in order to appeal to modern sensibilities.

“We ask you to turn your minds once more to the liturgical innovation of the new rite of the Mass. This new rite will be introduced into our celebration of the holy Sacrifice starting from Sunday next which is the first of Advent, November 30 (1969).

“A new rite of the Mass: a change in a venerable tradition that has gone on for centuries. This is something that affects our hereditary religious patrimony, which seemed to enjoy the privilege of being untouchable and settled. It seemed to bring the prayer of our forefathers and our saints to our lips and to give us the comfort of feeling faithful to our spiritual past, which we kept alive to pass it on to the generations ahead…

“So what is to be done on this special and historical occasion? First of all, we must prepare ourselves. This novelty is no small thing…

“It is here that the greatest newness is going to be noticed, the newness of language. No longer Latin, but the spoken language will be the principal language of the Mass. The introduction of the vernacular will certainly be a great sacrifice for those who know the beauty, the power and the expressive sacrality of Latin. We are parting with the speech of the Christian centuries; we are becoming like profane intruders in the literary preserve of sacred utterance. We will lose a great part of that stupendous and incomparable artistic and spiritual thing, the Gregorian chant.

“We have reason indeed for regret, reason almost for bewilderment. What can we put in the place of that language of the angels? We are giving up something of priceless worth. But why? What is more precious than these loftiest of our Church’s values?

“Understanding of prayer is worth more than the silken garments in which it is royally dressed. Participation by the people is worth more—particularly participation by modern people, so fond of plain language which is easily understood and converted into everyday speech.”

Of course, as we now know, the response of many of the faithful was simply to abandon this new innovation. Sadly, many have left the Church altogether. Weekly Mass attendance in much of western Europe today is less than 10 percent.

Reading these words from Paul VI one is reminded of that famous quote from Father Joseph Gelineau, SJ, one of the experts involved in the formulation of the new order of the Mass:

“This needs to be said without ambiguity: the Roman Rite as we knew it no longer exists. It has been destroyed.”

This assessment was made by Fr. Gelineau in 1977, less than ten years after the New Mass was implemented. It was said without any regret.

← Evangelization and the Need for the Latin Mass
Papal Infallibility Revisited →