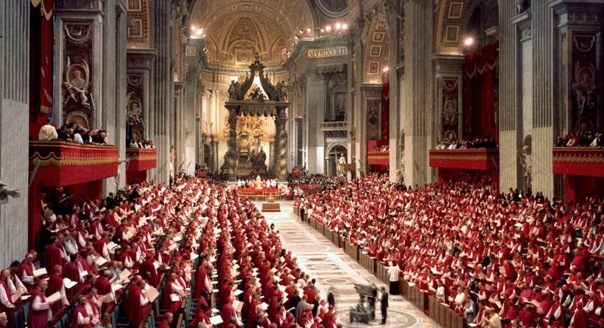 Back in December of 2005 during his Christmas message to the Roman Curia, Pope Benedict XVI spoke of the difficulties which had been endured by the Church in the 40 years since the conclusion of the Second Vatican Council. The Holy Father asked the simple yet probing question, “Why has the implementation of the Council, in large parts of the Church, thus far been so difficult?” He then described what in large measure would be the defining theme of his pontificate:

Well, it all depends on the correct interpretation of the Council or — as we would say today — on its proper hermeneutics, the correct key to its interpretation and application. The problems in its implementation arose from the fact that two contrary hermeneutics came face to face and quarreled with each other…

On the one hand, there is an interpretation that I would call “a hermeneutic of discontinuity and rupture”; it has frequently availed itself of the sympathies of the mass media, and also one trend of modern theology.

On the other, there is the “hermeneutic of reform”, of renewal in the continuity of the one subject-Church which the Lord has given to us. She is a subject which increases in time and develops, yet always remaining the same, the one subject of the journeying People of God.

Much of the “Reform of the Reform” that we have been witnessing within the liturgy over the past decade or more is largely a result of a hermeneutic of continuity being applied. The basic belief held by many of us within the Church is that the post Conciliar liturgy should not differ significantly from the pre Conciliar liturgy. In other words, the Novus Ordo (the Ordinary Form of the Mass) as celebrated in most parishes today in no way resembles what the Fathers of the Council could have imagined. Coming from a background of only celebrating the Tridentine Mass (what we today call the Extraordinary Form), the Council Fathers could not have imagined the highly Protestantized masses offered in many places today.

Pope Benedict’s Motu Proprio Summorum Pontificum sought to reestablish a place within the Church for the widespread availability to the faithful of the Traditional Latin Mass. The Holy Father and those who seek to correct the liturgical trajectory of the Church by asserting a hermeneutic of continuity also view the Extraordinary Form as a corrective for the Ordinary Form. Ultimately it is hoped that the two forms would so compliment each other that the faithful could find comparable beauty and reverence in either.

So how do we stop and then reverse the trend of this nearly four decade desacralization of the Holy Mass? Are there concrete and definable actions that a pastor and parish can take to emphasize a continuity with our liturgical heritage, as well as developing a level of consistency and familiarity between the two current forms of the Latin Rite?

I would like to propose seven practices that can begin to help accomplish these stated goals. There is nothing new here. These ideas have been discussed and debated individually for years. This is not an exhaustive list by any means. I do believe, however, that the following list would respect the liturgical tradition of the Church while not rejecting the recommendations put forth by the Second Vatican Council in Sacrosanctum Concilium, the Constitution on the Sacred Liturgy.

1. The Mass should be offered Ad orientem. There is no requirement to offer the Ordinary Form with the priest facing the people (versus populum). The historical and liturgical history of Christianity point to all “facing the east” in anticipation of Christ’s second coming. We have seen the theological value of this argued for by no less than Klaus Gamber, Joseph Jungmann, Louis Bouyer, and Joseph Ratzinger; the last three men having all been present at the Council.

2. Extensive use of Latin. It has been the language of our Church for at least 1,700 years, why not speak it in our liturgy! The Second Vatican Council itself reaffirmed that “the use of the Latin language is to be preserved in the Latin rites.” (SC 36.1). The Council while allowing for a wider use of the vernacular within the liturgy, clearly stated that “steps should be taken so that the faithful may also be able to say or to sing together in Latin those parts of the Ordinary of the Mass which pertain to them.” (SC 54). There are currently priests and religious communities who offer the Ordinary Form of the Mass in Latin; it can be done.

3. Communion on the Tongue. This one generates a great deal of emotion for people. I simply want to highlight three facts. The Extraordinary Form does not permit for Communion to be received on the hand. For the majority of the 2,000 year history of the Catholic Church the faithful received on the tongue. Finally, it is important to remember that “the distribution of Communion on the hand continues to remain, from the juridical standpoint, an exception (indult) to the universal law, conceded by the Holy See to those bishops’ conferences who have requested it.” Not my words, but those of papal master of ceremonies Monsignor Marini.

4. Altar boys only. Again, the Extraordinary Form does not permit for altar girls since the current allowance for them is derogated due to its incompatibility with the rubrics of the liturgical books in effect in 1962. There are those few dioceses, parishes and communities that do not permit for girls to serve at the altar. The case against girls serving at Mass is usually based on tradition, priestly vocations and reduced male participation.

5. Extraordinary Ministers of Holy Communion. Remember, they are called “extraordinary” for a reason. The Church has previously declared that Extraordinary ministers may distribute Holy Communion “where there are particularly large numbers of the faithful and which would be excessively prolonged because of an insufficient number of ordained ministers to distribute Holy Communion.” (Ecclesia de mysterio, Article 8 Section 2). Unfortunately, it seems as if we have all participated in masses in which the pre-determined number of EMHC’s far exceeded the need. Additionally, “excessively prolonged” distribution of Communion is somewhat subjective. Are we truly in such a hurry to “hit the road” after Mass that we couldn’t spend more time in prayerful Thanksgiving for the gift of the Holy Eucharist (thanksgiving) we have just consumed?

6. Greater use of Chant and Polyphony. The Second Vatican Council reaffirmed that the Church acknowledges Gregorian chant as specially suited to the Roman liturgy: therefore, other things being equal, it should be given pride of place in liturgical services.” (SC 116). Anyone who has participated at a Mass in which the Schola or Choir has incorporated Chant and traditional music understands how vital this is for recapturing the sacred.

7. The Sign of Peace. This is extended by the priest to the faithful following the Our Father and before the Agnus Dei. Traditionally this did not include the faithful turning and extending the sign of peace to each other, particularly since consecration proceeds this moment and our Lord is already present on the altar. I have seen more and more priests beginning to move on immediately to the Agnus Dei following the sign of peace between them and the faithful, thereby maintaining the level of reverence within this moment of the Mass.

There it is. Please note that while all seven of these suggestions are already present in the Extraordinary Form by requirement, none are precluded from the Ordinary Form. The hermeneutic of continuity that our Pope emeritus and others have been seeking as an antidote to the “pre Conciliar/post Conciliar” perception of the liturgy is not far from being realized.

There is a lot that has been offered in today’s post. Please jump in with your comments and feel free to share your own experiences.