8 Saints on the Holy Mass 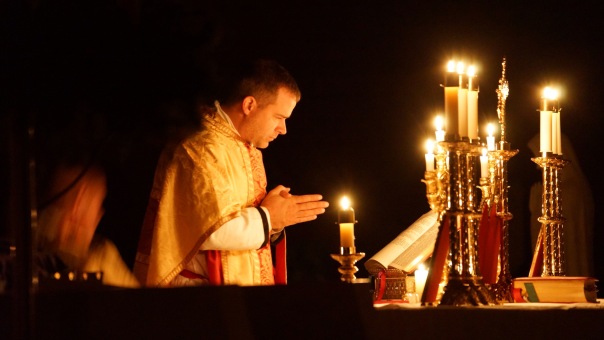 The following quotes on the Holy Sacrifice of the Mass can be found in Jesus Our Eucharistic Love , a book by Father Stefano Manelli, founder of the Franciscan Friars of the Immaculate. May the insight of these saints remind us that there is nothing more important we can do than to devoutly assist at Mass.

“The celebration of Holy Mass has the same value as the Death of Jesus on the Cross.”

“Man should tremble, the world should quake, all Heaven should be deeply moved when the Son of God appears on the altar in the hands of the priest.”

“It would be easier for the world to survive without the sun than to do so without the Holy Mass.”

“No human tongue can enumerate the favors that trace back to the Sacrifice of the Mass. The sinner is reconciled with God; the just man becomes more upright; sins are wiped away; vices are uprooted; virtue and merit increases; and the devil’s schemes are frustrated.”

“O you deluded people, what are you doing? Why do you not hasten to the churches to hear as many Masses as you can? Why do you not imitate the angels, who, when a Holy Mass is celebrated, come down in myriads from Paradise and take their stations about our altars in adoration to intercede for us?”

“Know, O Christian, that the Mass is the holiest act of religion. You cannot do anything to glorify God more, nor profit your soul more, than by devoutly assisting at it, and assisting as often as possible.”

“One merits more by devoutly assisting at a Holy Mass than by distributing all of his goods to the poor and traveling all over the world on pilgrimage.”

“Martyrdom is nothing in comparison with the Mass, because martyrdom is the sacrifice of man to God, whereas the Mass is the Sacrifice of God for man!”

An earlier version of this article was posted on January 6, 2014.