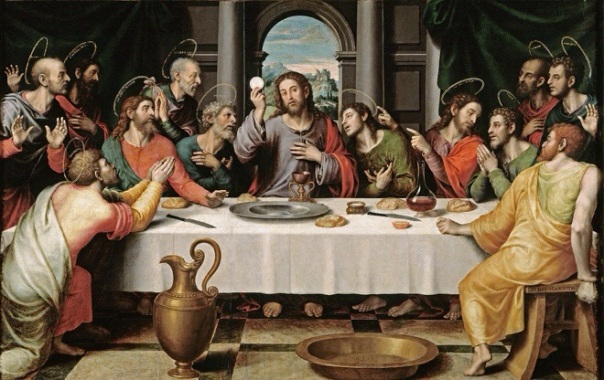 I have found myself on several occasions of late having to defend the Eucharist. I don’t mean an actual, physical, defense but rather a historical defense of the Real Presence to non-believers.

By no means am I an apologist. And while this blog is primarily focused on the restoration of beauty to the Sacred Liturgy, too often in life the Church comes under attack, often with the Eucharist being the focus of dispute. We cannot take a pass on defending Our Lord.

Here is an approach that I find to be effective when discussing this dogmatic truth of our faith to those Christians who do not believe.

To Be Steeped in History

Often errors concerning the Real Presence come from an ignorance of both history and the beliefs of the earliest Christians. As Blessed John Henry Newman famously said, “To be steeped in history is to cease being Protestant.”

As a tactic, I refuse to debate interpretation of Scripture when discussing the Eucharist with Protestants. We have already witnessed the “fruits” of such debates among these ecclesial communities: five centuries of disagreement and further disunity.

I simply ask this question: Who in the first millennium of Christianity rejected the Eucharist? Or put another way, which of the Early Church fathers did not believe in the Real Presence?

In “The Emergence of the Catholic Tradition (100-600)”, the first volume of Jaroslav Pelikan’s classic series The Christian Tradition: A History of the Development of Doctrine, he specifically addresses this.

Professor Pelikan, who for decades taught history at Yale University and was not Catholic, noted that, “…the doctrine of the real presence of the body and blood of Christ in the Eucharist…did not become the subject of controversy until the ninth century.” (page 166). In other words, from the Apostolic era of the first century until the ninth, history records no dispute over the real presence of Jesus Christ in the Eucharist.

Pelikan further observed that “no orthodox father of the second or third century of whom we have record…declared the presence of the body and blood of Christ in the Eucharist to be no more than symbolic…”(page 167). Indeed, to the Early Fathers it was anything but a symbol.

Just from the second, third and fourth centuries alone we can look to Early Fathers such as St. Ignatius of Antioch, St. Justin Martyr, St. Irenaeus, St. Cyril of Jerusalem, St. John Chrysostom, St. Ambrose of Milan and St. Augustine for guidance. All of these Fathers repeatedly speak of their belief that the Eucharist is the body and blood of our Lord Jesus Christ:

“They abstain from the Eucharist and from prayer, because they confess not the Eucharist to be the flesh of our Saviour Jesus Christ, which suffered for our sins, and which the Father, of His goodness, raised up again. Those, therefore, who speak against this gift of God, incur death in the midst of their disputes.”

“And this food is called among us the Eucharist, of which no one is allowed to partake but the man who believes that the things which we teach are true, and who has been washed with the washing that is for the remission of sins, and unto regeneration, and who is so living as Christ has enjoined. For not as common bread and common drink do we receive these; but in like manner as Jesus Christ our Saviour, having been made flesh by the Word of God, had both flesh and blood for our salvation, so likewise have we been taught that the food which is blessed by the prayer of His word, and from which our blood and flesh by transmutation are nourished, is the flesh and blood of that Jesus who was made flesh.”

While there are scriptural references such as John 6 and 1st Corinthians 11 which are clearly Eucharistic, we avoid these contentious battles over scriptural interpretation by focusing on writings such as those above. After all, unless an interpretation of scripture is purely an innovation of the sixteenth century, it should be easy to find consistent, supporting, evidence of such views in the numerous writings of the saints. For those who deny the Eucharist, however, their search for such evidence is in vain.

All the Rest of Life is Expendable

In our defense of the Eucharist I am reminded of that great story from Flannery O’Connor, found in her collection of letters, “The Habit of Being”:

“I was once, five or six years ago, taken by some friends to have dinner with Mary McCarthy and her husband, Mr. Broadwater. (She just wrote that book, “A Charmed Life.”) She departed the Church at the age of 15 and is a Big Intellectual. We went at eight and at one, I hadn’t opened my mouth once, there being nothing for me in such company to say. . .

Well, toward morning the conversation turned on the Eucharist, which I, being the Catholic, was obviously supposed to defend. Mrs. Broadwater said when she was a child and received the host, she thought of it as the Holy Ghost, He being the most portable person of the Trinity; now she thought of it as a symbol and implied that it was a pretty good one. I then said, in a very shaky voice, Well, if it is a symbol, to hell with it.

That was all the defense I was capable of but I realize now that this is all I will ever be able to say about it, outside of a story, except that it is the center of existence for me; all the rest of life is expendable.”

May we demonstrate such courage, conviction and zeal as well in our defense of our Lord’s real presence in the Holy Eucharist.