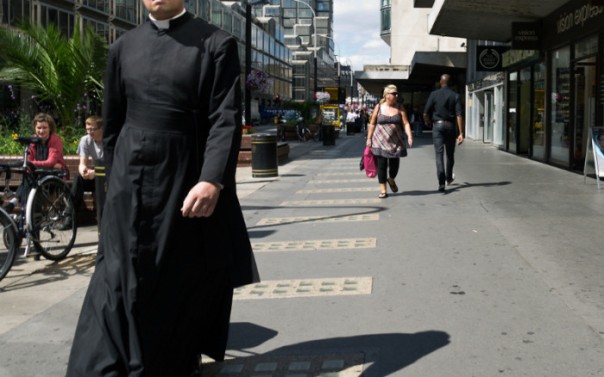 This past week, at the Liturgy Guy Facebook page, we counted down the most viewed articles of the year. As it turns out, the top post from 2017 was about the return of the cassock.

The Priest in Cassock is a Living Sermon struck a chord with my readers. Profiling the incredible apostolate of the “walking priest”, Father Lawrence Carney, the article from last March touched upon the compelling presence and powerful witness of a priest in traditional clerical garb:

Walk the streets of St. Joseph, Missouri, and you may have a memorable encounter with a tall young priest wearing a black cassock and Saturno clergy hat, a rosary in one hand and large crucifix in the other. The priest is Father Lawrence Carney, ordained for the Diocese of Wichita, Kansas, who for the past three years has devoted much of his time to street evangelism: strolling down inner city streets, praying the Rosary and sharing the Gospel with those who approach him.

Highlighting this reemergence of the cassock, and the (overall) positive effect it has upon both priest and laity, shouldn’t really surprise anyone. In recent years Monsignor Charles Pope has written on why he wears the cassock, as well as my friend Father Jay Finelli, and even the secular magazine Esquire published an article in which a journalist donned a cassock for the day only to discover that:

…when you wear a uniform, no one will touch you. Except the priest. People will touch a priest. On the wrist mostly. It happened to me twelve times, just a tap in the middle of a conversation. An assertion of connection, an acknowledgment of some commonality I could not fathom. Weirdly, the priest’s outfit was the most physically demanding uniform to wear. All day with the hugging, and the kneeling to speak to children, and the leaning in for the selfies.

An increasing number of Catholic priests are wearing the cassock again. They are looking to be beacons of light in a world darkened by sin. They are choosing traditional attire as a visible sign of their priesthood. Unfortunately, while most of the laity welcome the return of the cassock, some priests do not.

It’s a given that the world will attack our priests. Mock them. Look to drive their visible presence out of the public square (consider the outlawing of clerical attire so common to totalitarian regimes).  But when it is a priest doing the attacking, it’s even more distasteful.

Father Frank Lawlor of the Diocese of Springfield, Massachusetts has decided to publicly insult priests who wear the cassock. He chose to do so on the Facebook wall of a brother priest, and specifically in response to my article about Fr. Carney. Amidst the amazing testimonials regarding the walking priest’s apostolic outreach, Fr. Lawlor could only offer the following assessment:

Fr. Frank’s attitude is all the more troubling considering his past and present responsibilities. Although ordained just three years ago, he is currently pastor of St. Mary’s Parish and School in Westfield, Massachusetts. Prior to entering seminary, (then Deacon) Lawlor was the development director for the Newman Catholic Center at the University of Massachusetts Amherst.

Fr. Frank, ordained at the age of 57 in 2014, garnered attention at the time for his unusual path to the priesthood. The divorced father of three, and now grandfather, required an annulment before entering Saint John XXIII National Seminary for the Diocese of Springfield.

What is most unfortunate about Fr. Frank’s comment isn’t simply its lack of charity (though that is telling), but rather his complete misinterpretation of the current ecclesial environment and sensus fidelium.

Outside of the staunchest ideologues from the Vatican 2/baby boomer generation, no one believes what Father wrote. His point of view on this matter is out of step with almost anyone born after the Council.

What is accurate, and I know this from the hundreds of comments and thousands of shares generated by my article, is that the faithful long to see our Catholic priests looking Catholic. The presence of the priest in cassock, as the earlier quotes above attest to, draws people to him. It isn’t the person, but the priestly office. Put simply: Fr. Frank’s anti-clerical bias is the self-loathing Catholicism of a past generation that we firmly reject today.

When all of this was brought to his attention, Fr. Frank’s rebuttal demonstrated a complete misunderstanding of the post-conciliar crisis and resulting widespread apostasy:

What Fr. Frank and others who hold his views fail to understand is that they still view the factors which created the mass exodus as the very solution for the mass exodus they caused!

The movement to restore tradition, to rediscover the sacred and supernatural truth of our faith, isn’t going to accept the failed pastoral approach of the 1970’s & ‘80’s. The more Catholicism lost its identity as it rushed to conform itself to the world, instead of forming the world through grace, the more we failed in our apostolic mission. Where the Church looked to Protestantism to heal (largely) self-inflicted wounds, more Catholics became ex-Catholics.

Fr. Frank need look no further than traditional parishes, dioceses, and orders to see how very wrong he is about those “men in dresses.” Sitting there in Westfield, Massachusetts (in a diocese with over 70 parish closures in the last 17 years), he need only look over to Enfield, Connecticut and the thriving traditional Mass community of St. Martha’s to gain a better understanding of the situation.

In the end, what we must offer Fr. Frank Lawlor is our prayers. He is a priest of God in the order of Melchizedek and very much in need of our prayerful support. Many young souls are in his care, a daunting responsibility that should concern anyone with a healthy fear of the Lord.

Because his comments were public, this response is public. However, it is my hope that his brother priests who wear the cassock extend to him the fraternal charity that was so lacking in his words.