“The Latin Mass Has Made Me a Better Priest.” 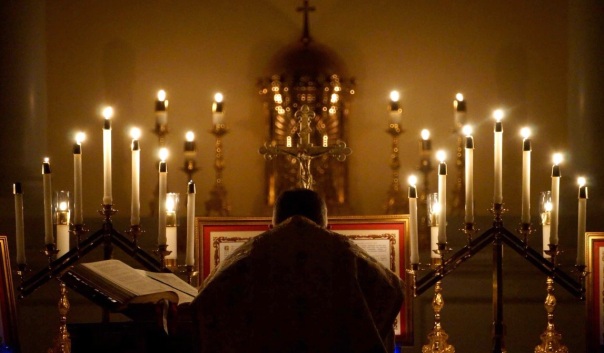 As the Church nears the tenth anniversary of Pope Benedict XVI’s landmark Motu Proprio Summorum Pontificum, another anniversary recently occurred at St. Ann Catholic Church in Charlotte, North Carolina. It has been 9 years since the Latin Mass returned to Charlotte. Since that first Low Mass, offered on a Saturday morning (May 31, 2008), the traditional Mass has continued to grow in availability and popularity in the city.

I recently asked the pastor of St. Ann’s, Fr. Timothy Reid (a Methodist convert who recently appeared on EWTN’s The Journey Home) how offering the ancient rite has impacted him as a priest:

“After 9 years of offering the Latin Mass, I can say that it’s made me a better priest. I’ve loved being steeped in its tradition and being formed by its rubrics and prayers. Most importantly, offering the Latin Mass has improved the way I offer the Novus Ordo Mass. The discipline that the Latin Mass requires in offering it has certainly carried over into the way I offer the Novus Ordo Mass. I’ve certainly experienced the mutual enrichment that Pope Benedict XVI hoped would happen when the Latin Mass and Novus Ordo are offered side by side, and I believe our parish has, too. I definitely have a renewed and greater appreciation for the awesome dignity of the Mass.”

Fr. Reid’s response shouldn’t surprise us. In fact, I’ve heard similar sentiments expressed by other priests who offer the Traditional Latin Mass. To a man they have expressed an enhanced understanding of the Holy Sacrifice, as well as their priesthood, through exposure to the older rite.

You may recall that Archbishop Alexander K. Sample of Portland, Oregon discussed these very same benefits when he addressed the Sacra Liturgia conference in Rome in 2013. At the time he noted:

All of this is why I would urge bishops to familiarize themselves with the usus antiquior as a means of achieving their own deeper formation in the liturgy and as a reliable reference point in bringing about renewal and reform of the liturgy in the local Church. Speaking from personal experience, my own study and celebration of the older liturgical rites has had a tremendous effect on my own appreciation of our liturgical tradition and has enhanced my own understanding and celebration of the new rites.

The bishop should also encourage his seminarians to familiarize themselves with that usus antiquior, not just for the possibility that they may…be called upon to celebrate this form of the Mass for the benefit of the faithful, but indeed for the future priest’s own appreciation of the deep and rich liturgical tradition from which the reformed rites flow…

The simple truth is that the Roman Rite has two forms presently: the Ordinary Form (the Mass introduced in 1970), and the Extraordinary Form (a liturgy which dates back to the earliest centuries, largely unchanged since the first millennium).

Isn’t it time for the Church to listen to men who offer both forms of the Roman Rite, like Archbishop Alexander Sample and Fr. Timothy Reid? Hasn’t the time come for all priests in the Roman Rite, and particularly for seminarians, to deepen their understanding of the Sacrifice of the Altar by learning the Traditional Latin Mass?