Cardinal Ranjith on the Priest in the Post Conciliar Liturgy 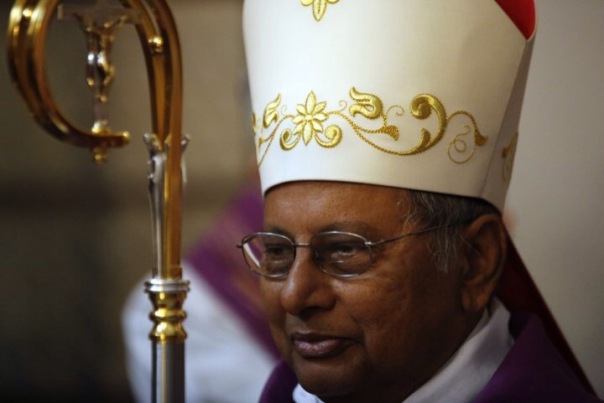 The following post, excerpted from Malcolm Cardinal Ranjith’s address at the first Sacra Liturgia conference held in Rome in 2013, is the second of a three part series focused on erroneous ideas that were introduced into the sacred liturgy in the post conciliar years.  Cardinal Ranjith clearly and convincingly argues that the blurring of lines between the liturgical roles of the faithful and that of the clergy has often reduced our worship to simply a matter of “performance”, resulting in an anthropocentric liturgy wherein the “central role of Christ fades away…”

The complete address, along with the remaining talks from the first Sacra Liturgia conference, are available from Ignatius Press in a single volume edited by Dom Alcuin Reid.

From Cardinal Ranjith’s talk “The Sacred Liturgy, Source and Summit of the Life and Mission of the Church”:

“Another such reformist misconception in the matter of liturgy has been the tendency to confuse the altar and the nave.  It is often noted that the essential distinction in liturgy between the role of the clergy and that of the laity had been mixed up due to a misunderstanding of the difference between the priestly office of all the faithful (the common priesthood) and that of the clergy (the ministerial priesthood), a difference clearly highlighted in the Second Vatican Council’s Dogmatic Constitution Lumen Gentium. This explained that, although the common priesthood of all the baptized which the Church has always upheld (cf. Apoc 1:6; 1 Pet 2:9-10; Mediator Dei 39-41, Lumen Gentium, 10) and the ministerial priesthood are in their own way “a participation in the one priesthood of Christ”, “they differ from one another in essence and not only in degree” (n. 10).  The Liturgical Constitution  of the same Council, in fact, asserted that “the liturgy makes distinctions between persons according to their liturgical function and Sacred Orders” (Sacrosanctum Concilium, 32).  Mediator Dei, of course, was even more categorical when it stated that “only to the Apostles and thenceforth to those on whom their successors have imposed hands, is granted the power of the priesthood” (n. 40).

“The result of this confusion of roles in the modern era has been the tendency to clericalize the laity and to laicize the clergy. Indicative of this confusion has been the increasing removal of the altar rails from our sanctuaries and the sitting or squatting of everyone around an ad hoc altar.  Far too many people have started to walk about or get into the sanctuary, so much so, that there is much distraction and disturbance at many of our liturgical services.  The Holy Eucharist in such a situation becomes a show and the priest the showman…

“The priest here becomes the main actor playing out a drama, with other actors on the altar and the more dramatic and sensational they all become, the more they feel that they are performing well.  The central role of Christ fades away in such a scenario.  Even though at first it may sound nice, later on it becomes a big bore.”

Reid, ed., Sacred Liturgy: The Source and Summit of the Life and Mission of the Church (San Francisco: Ignatius Press), 2014.
(Photo Credit: Reuters)