Restoring a Sense of the Sacred to the Mass 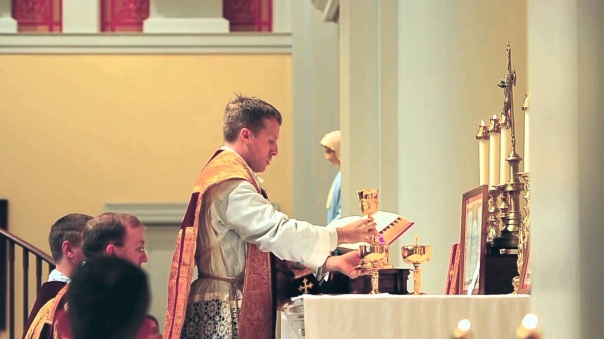 In October 1966, less than a year after the conclusion of the Second Vatican Council, philosopher and eminent Catholic theologian Dietrich Von Hildebrand asked whether or not we are better prepared to “meet Christ in the mass by soaring up to Him, or by dragging Him down into our own pedestrian, workaday world.” (The Case for the Latin Mass, Triumph Magazine, October 1966). For nearly fifty years the Church has been struggling to address this question.

Following decades in which the liturgy was intentionally stripped of almost any sense of mystery, the current attempts at reform have gradually sought to recover a sense of awe and to restore the sacred to the Mass.

Discussing the mystery present within eastern liturgies, particularly in comparison to the west, former prefect for the Congregation of Divine Worship and the Discipline of the Sacraments, Cardinal Malcolm Ranjith noted:

The Orthodox churches and churches of the east still carry on their liturgy in that mystical fashion: there is chanting, there is use of different languages which are not spoken languages, then there is more incense…an aura of otherness happens and after the reforms of the Council, sometimes not because of the reformers but because individual persons decided to take matters into their hands and did things rather superfluously, the Church had gradually lost that mystical element, the element of the hidden. And that’s why our people are finding our liturgy…our prayer life…boring.

In the ongoing effort to recover this “mystical element” within the liturgy, the Church has been returning to such venerable practices as the use of Latin, chant and incense during the Holy Mass. Establishing a sense of awe through such tangible means has also helped to diminish the anthropocentric tendency so prevalent in the post-conciliar liturgy.

At last years Sacra Liturgia conference in Rome, Cardinal Ranjith spoke of the importance that Summorum Pontificum has had to this end:

The re-introduction of the usus antiquior -the older form of the Roman liturgy -by Pope Benedict XVI was thus not a retrograde step as some called it, but a move to bring back to Sacred Liturgy a deeper sense of awe and mysticism and a way in which the Pope sought to prevent a blatant banalization of something so pivotal to the life of the Church.

Latin: The Language of the Liturgy

The importance of this increasing use of Latin within the Novus Ordo cannot be overstated. In a 2012 speech given to the Fourth Meeting on Catholic Unity sponsored by Réunicatho, Bishop Athanasius Schneider was so bold as to identify “the total disappearance of Latin in the huge majority of Eucharistic celebrations in the Ordinary Form” as one of five wounds of the liturgical mystical body of Christ.

Further, the restoration of Latin to the liturgy serves as a source of unity for the universal Church, both across cultures and centuries. Less than twenty years before the Second Vatican Council, Pope Pius XII reminded the faithful that the “use of the Latin language, customary in a considerable portion of the Church, is a manifest and beautiful sign of unity, as well as an effective antidote for any corruption of doctrinal truth.” (Mediator Dei, 60).

I recently heard a homily online in which the priest rejected the use of Latin within the liturgy by saying, “I’m not going to say Mass in Latin because it doesn’t say anything to me.” This particular priest, who was ordained in 1970, illustrates the very urgent necessity for restoring a sense of awe to the Church’s supreme act of worship. Forty years of poor formation and anthropocentric liturgies have devastated the very understanding of the Mass. Latin, often spoken in silence by the celebrant, serves to remind us who we are addressing in the liturgy.

Gregorian chant is yet another way in which the Church is recovering a sense of the sacred. When the Second Vatican Council stated that chant has pride of place in the liturgy (Sacrosanctum Concilium, 116) it was simply reaffirming an already established and ongoing reform of music within the Roman Rite. In his 1903 Motu Proprio Tra le Sollecitudini, Pope St. Pius X reminded the faithful:

Gregorian Chant has always been regarded as the supreme model for sacred music, so that it is fully legitimate to lay down the following rule: the more closely a composition for church approaches in its movement, inspiration and savor the Gregorian form, the more sacred and liturgical it becomes; and the more out of harmony it is with that supreme model, the less worthy it is of the temple.

Sacred music within the Mass should glorify God and sanctify the faithful. In a 2013 pastoral letter to the people of the Diocese of Marquette, then Bishop Alexander Sample emphasized that music “proper” to the Sacred Liturgy possesses three qualities: sanctity, beauty, and universality. Bishop Sample explained that these qualities are not “arbitrary or subjective”, but instead “objectively flow from the essential nature and purpose of sacred music itself.”

Often in the post-conciliar years we have heard “inculturation” invoked to excuse a myriad of abuses and excesses. In his letter, Bishop Sample noted that sacred music transcends cultures and that not “every form or style of music is capable of being rendered suitable for the Mass.” As more parishes are now offering the Traditional Latin Mass in the years following Summorum Pontificum, we are now seeing a greater use of chant within the Novus Ordo as well. 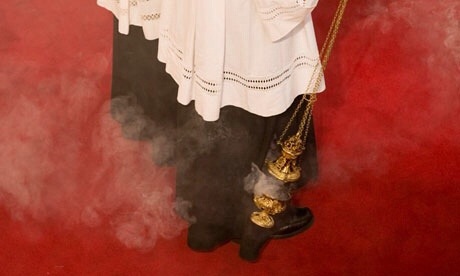 Incense: The Ambiance of Heaven

Finally, an “aura of otherness” is being further recovered in the liturgy through the use of incense. Our olfactory receptors, which facilitate our sense of smell, are directly connected to the limbic system, which is believed to be the seat of emotion in our brains. For most, the smell of incense at Mass is something separate and distinct from other scents encountered outside of the Mass. Through the use of incense, then, the Church finds yet another way to communicate that we are entering the sacred when we participate in the liturgy.

Writing in his column Straight Answers for the Arlington Catholic Herald, Father William Saunders explains that, within the sacred liturgy:

The purpose of incensing and the symbolic value of the smoke is that of purification and sanctification…the smoke symbolizes the prayers of the faithful drifting up to heaven: the Psalmist prays, “Let my prayer come like incense before you; the lifting up of my hands, like the evening sacrifice” (Psalm 141).

Incense also creates the ambiance of heaven: The Book of Revelation describes the heavenly worship as follows: “Another angel came in holding a censer of gold. He took his place at the altar of incense and was given large amounts of incense to deposit on the altar of gold in front of the throne, together with the prayers of all God’s holy ones. From the angel’s hand, the smoke of the incense went up before God, and with it the prayers of God’s people.

Assessing the liturgical changes already underway by October 1966, Dietrich Von Hildebrand wrote: “The new liturgy actually threatens to frustrate the confrontation with Christ, for it discourages reverence in the face of mystery, precludes awe, and all but extinguishes a sense of sacredness.” In recent years Holy Mother Church has begun to slowly recover this sense of the sacred within the Mass through the use of Latin, Gregorian chant and incense. In the years to come may we continue to see the Church strive to “meet Christ in the mass by soaring up to Him”, fully seeking to restore the mystical element to our Catholic worship.