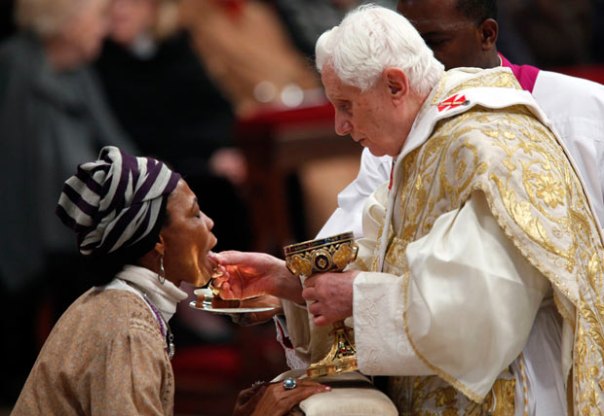 “If we trivialize Communion, we trivialize everything, and we cannot lose a moment as important as that of Communion, of recognizing the real presence of Christ there, of the God who is the love above all loves…”

These are the words of Cardinal Antonio Canizares Llovera as reported by the Catholic News Agency in July 2011. As Cardinal Llovera is the prefect of the Congregation for Divine Worship and the Discipline of the Sacraments, his recommendation is deserving of our time and personal reflection.

What the Church Instructs

Before continuing, it is important to state something upfront. No one is disputing that receiving in the hand is permitted in those countries where permission was requested and an indult granted by the Holy See. That the practice is perfectly licit in the Ordinary Form of the Roman rite where an indult was granted is a matter of fact.

It is also accurate, however, to note that “the distribution of Communion on the hand continues to remain, from a juridical standpoint, an exception to the universal law” of receiving on the tongue according to Monsignor Guido Marini, papal Master of Ceremonies for both Pope Benedict XVI and now Pope Francis.

When discussing how the faithful should best receive our Lord at Holy Communion, we should strive to see this through the eyes of our Holy Mother the Church. This does require, however, a spirit of humility and receptivity on our part.

In his seminal work The Spirit of the Liturgy (Ignatius Press, 2000), then Cardinal Joseph Ratzinger discussed the significance and theology of kneeling within the liturgy:

“(W)hen someone tries to take worship back into the purely spiritual realm and refuses to give it embodied form, the act of worship evaporates, for what is purely spiritual is inappropriate to the nature of man. Worship is one of those fundamental acts that affect the whole man. That is why bending the knee before the presence of the living God is something we cannot abandon.” (pp. 190-191)

Cardinal Ratzinger further notes that the very act of kneeling is itself counter cultural.

“It may well be that kneeling is alien to modern culture — insofar as it is a culture, for this culture has turned away from the faith and no longer knows the one before whom kneeling is the right, indeed the intrinsically necessary gesture. The man who learns to believe learns also to kneel, and a faith or a liturgy no longer familiar with kneeling would be sick at the core. Where it has been lost, kneeling must be rediscovered…” (p. 194)

Looking to continually guide the faithful in this matter, the Congregation for Divine Worship and the Discipline of the Sacraments in 2004, with then prefect Cardinal Francis Arinze, stated in Redemptionis Sacramentum that:

“…it is not licit to deny Holy Communion to any of Christ’s faithful solely on the grounds, for example, that the person wishes to receive the Eucharist kneeling…”(91) and “each of the faithful always has the right to receive Holy Communion on the tongue…” (92)

Liturgical Celebrations of the Supreme Pontiff

There may be no better argument for returning to the traditional practice then the 2008 statement “Communion received on the tongue and while kneeling” issued by the Office for the Liturgical Celebrations of the Supreme Pontiff. This instruction was released following the Solemnity of Corpus Christi in 2008 when the Holy Father began to exclusively distribute the Body of the Lord by placing it directly on the tongue of the faithful as they remain kneeling. It is worth referencing at length. The Holy See begins by observing that:

“(T)he most ancient practice of distributing Holy Communion was, with all probability, to give Communion to the faithful in the palm of the hand. The history of the liturgy, however, makes clear that rather early on a process took place to change this practice.”

This is a very important point to make as many today claim that Communion in the hand is recapturing the practice of the early Church. This of course rejects at least 11 centuries of organic, liturgical, development in the Church. It also embraces antiquarianism; an approach to the liturgy that was soundly condemned by Pope Pius XII in the 1947 encyclical Mediator Dei. Returning to the 2008 instruction from the Holy See:

“From the time of the Fathers of the Church, a tendency was born and consolidated whereby distribution of Holy Communion in the hand became more and more restricted in favor of distributing Holy Communion on the tongue. The motivation for this practice is two-fold: a) first, to avoid, as much as possible, the dropping of Eucharistic particles; b) second, to increase among the faithful devotion to the Real Presence of Christ in the Sacrament of the Eucharist.”

As I have written about previously, the Center for Applied Research in the Apostolate at Georgetown University has documented that 43 percent of Mass attending Catholics agree with the statement, “Bread and wine are symbols of Jesus, but Jesus is not really present.”

There is also an interesting disconnect which occurs for many who both understand and appreciate the posture of kneeling when in the presence of our Lord, such as during Eucharistic adoration, but do not recognize the need for this same awe and reverence when receiving our Lord at Holy Communion.

“Saint Thomas Aquinas also refers to the practice of receiving Holy Communion only on the tongue. He affirms that touching the Body of the Lord is proper only to the ordained priest.”

“Therefore, for various reasons, among which the Angelic Doctor cites respect for the Sacrament, he writes: “. . . out of reverence towards this Sacrament, nothing touches it, but what is consecrated; hence the corporal and the chalice are consecrated, and likewise the priest’s hands, for touching this Sacrament. Hence, it is not lawful for anyone else to touch it except from necessity, for instance, if it were to fall upon the ground, or else in some other case of urgency” (Summa Theologiae, III, 82, 3).

Over the centuries the Church has always characterized the moment of Holy Communion with sacredness and the greatest respect, forcing herself constantly to develop to the best of her ability external signs that would promote understanding of this great sacramental mystery….The Western Church has established kneeling as one of the signs of devotion appropriate to communicants…Kneeling indicates and promotes the adoration necessary before receiving the Eucharistic Christ.

For this reason, (then) Cardinal Ratzinger maintained that “the practice of kneeling for Holy Communion has in its favor a centuries-old tradition, and it is a particularly expressive sign of adoration, completely appropriate in light of the true, real and substantial presence of Our Lord Jesus Christ under the consecrated species” [cited in the Letter “This Congregation” of the Congregation for Divine Worship and the Discipline of the Sacraments, 1 July 1, 2002].

The statement from the Office for the Liturgical Celebrations of the Supreme Pontiff concludes by quoting Pope Benedict’s soon to be canonized predecessor:

“John Paul II, in his last Encyclical, Ecclesia de Eucharistia (“The Church comes from the Eucharist”), wrote in n. 61: “By giving the Eucharist the prominence it deserves, and by being careful not to diminish any of its dimensions or demands, we show that we are truly conscious of the greatness of this gift…Inspired by love, the Church is anxious to hand on to future generations of Christians, without loss, her faith and teaching with regard to the mystery of the Eucharist. There can be no danger of excess in our care for this mystery…”

The Hardness of Hearts

So often those who argue for the practice of receiving communion in the hand do so by simply contending “it is permitted”. One is reminded of our Lord’s response to the Pharisees in St. Matthew’s gospel when questioned regarding divorce.

They said to him, “Then why did Moses command that the man give the woman a bill of divorce and dismiss (her)?” He said to them, “Because of the hardness of your hearts Moses allowed you to divorce your wives, but from the beginning it was not so.” (Mt 19:7-8).

Many today cling to a form of legalism when arguing that they are “permitted” to receive in the hand. As we have seen already, has not the Church clearly instructed us upon the best means and the universal norm for humbly and reverently receiving our Lord at Holy Communion?

Ultimately the traditional practice for receiving Communion is an affirmative argument:

The Church in the Roman rite universally administered Communion to the faithful on the tongue and kneeling for well over a millennium, beginning sometime between the 6th and 9th centuries.

Indults to receive in the hand only began in the 1970’s, less than 40 years ago.

The majority of eastern rite churches, who primarily distribute Holy Communion via intinction, have never permitted the faithful to receive in the hand.

The Extraordinary Form of the Mass in the Roman rite does not permit the faithful to receive in the hand.

Rome has continuously instructed the faithful on the merit and universality of the traditional practice for as long as the indults have been in place.

Irreverence and disbelief in the Real Presence of our Lord has increased as the posture of kneeling has been lost. To quote then Cardinal Ratzinger again, “a liturgy no longer familiar with kneeling would be sick at the core.”

Finally, the faithful need not wait for the indults to be lifted in order to recapture this venerable practice. The Church has given her children ample instruction on this matter. The popes have given us extensive catechesis on this subject, most particularly by their personal example at Holy Mass.

Our Holy clergy need not wait either. There are parishes today which are reinstalling altar rails in order to recapture this venerable practice. Others are simply bringing in kneelers for the faithful to use during Holy Communion at Mass in order to recover this posture of adoration.

As Cardinal Llovera so beautifully stated, receiving Communion on the tongue while kneeling “is the sign of adoration that needs to be recovered…we cannot lose a moment as important as that of Communion, of recognizing the real presence of Christ there.”